The Container Spiral Storage finds it origin during one of the test runs. We ran out of containers at the trebuchet. In the pictures below, you can see the conveyor belt that transports an empty container to the funnel. The funnel catches the candy thrown by the trebuchet and drops it in the empty container.

This conveyor belt is able to store 8 empty containers, you can see below the conveyor belt with a row of six . To the left there is a bit more empty space, but this is where the table ends.

To the right of the conveyor belt (which is the bottom side on the picture), there is some more free space. One of the team members was asking for more container storage. While pointing to the empty space, he asked me to extend the conveyor belt with ‘some sort of spiral’. “Just build something simple”, he said. And I took the challenge.

I liked the idea of building a spiral. It needed to be something in the same style of the already existing conveyor belts, as can be seen on the previous photos. This was the first prototype of the container spiral.

As you can see in the video, the container runs easily downhill. Even so easy, that I needed to create a rail on the outer side of the spiral to prevent the containers from tumbling. The picture below has been made in Studio 2.0. Not only to create these amazing renderings, but also to count the number of bricks needed to build the spirals.

As you can see in the renders, the colors were matching with the already existing conveyor belts: the rollers black/red, the supporting structure in light bluish gray and the borders also red. The gears are all in light/dark bluish gray.

The spiral would consist of one and a half circles, making the tower +/- 30 cm in height. It would look something like the picture below.

As you can see in this picture, the motors haven’t been designed yet. I planned to insert them in the physical version once the spiral was build. An EV3 brick has 4 motor ports. Every half circle would be driven by one motor, and the fourth motor would drive the straight part that connects to the existing conveyor belt. That was the plan.

The next step: looking for Bricklink sites to buy the needed bricks.

But that was easier said than done ….

I will come back later on the difficulties I encountered while searching for the needed bricks. First, I want to give you an update about the second part of this build: the elevator.

Besides the spiral, I wanted to create a stack of containers. The stack would contain at least 10 containers, dropping them one by one (on request of the trebuchet conveyor when almost empty) onto the spiral rollers. My plan was to add this elevator to the start of the (extented) conveyor belt as shown in the following sketch:

It took me three prototypes to find a solution that would work, this is shown in the following video.

Because the containers are rotated 90 degrees, the total height would be around 60 – 75 centimeters. That would make the structure not very stable, especially when it needed to be transported. So I decided to look for a way, to revert the movement from a downwards dispenser, to an upwards dispenser.

On Youtube, you can see a test run of the final version of the Lego Container Spiral Storage.

In the video, you see the (almost) final version of the container loader. The only thing that is missing, is the power cable carrier.

What is new in this version (apart from finishing the build)? First of all, it has been added to the ‘real’ conveyor belt (you can see the enormous length ;-). This conveyor belt moves the containers from the warehouse to the wagons.

A new video of the work-in-progess of the Lego Mindstorms EV3 Monorail, has been uploaded to Youtube.

Enjoy the video and please leave a comment if you have suggestions. Compliments are welcome too ;-).

The grabber of the robot arm is opened and closed by pneumatic pressure. Therefore, I needed an air compressor that can generate a pressure of approx. 20 – 30 Psi. But how do you manage this air pressure? If the motor keeps running, the air pressure becomes too high. If you switch the motor on and off manually, you need to stay alert and watch the manometer if the air pressure doesn’t become too low. The solution: build an automatic start/stop system. In this article you can read how I achieved this.

END_OF_DOCUMENT_TOKEN_TO_BE_REPLACED

If you have two or more Lego Mindstorms EV3’s in daisy chain mode, it is not possible to use a Wifi connection with the EV3 as well. For our project, we need this functionality. Two embedded software engineers in our team are now updating the firmware to make this work. But are we going to be in time….? From a project management perspective, it is always wise to have a fallback scenario. But is there one….?

END_OF_DOCUMENT_TOKEN_TO_BE_REPLACED

Within our fully automated train project Sioux.NET on Track, we are starting a new sideproject called Sioux.NET on Sidetrack. 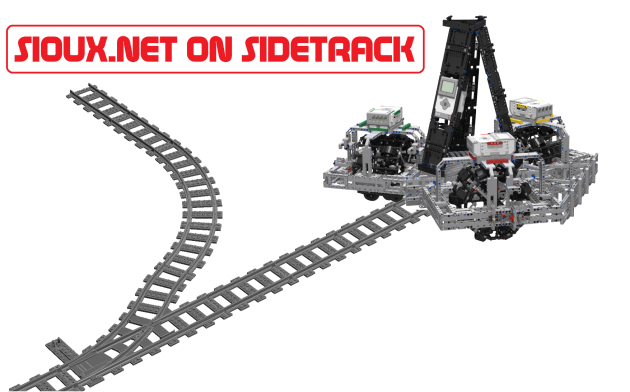 END_OF_DOCUMENT_TOKEN_TO_BE_REPLACED

I have written a small test program for picking up a container from a pre-defined place. It is still a bit slow, but it works.

For 2017, we are building a robot arm with 6 degrees of freedom. 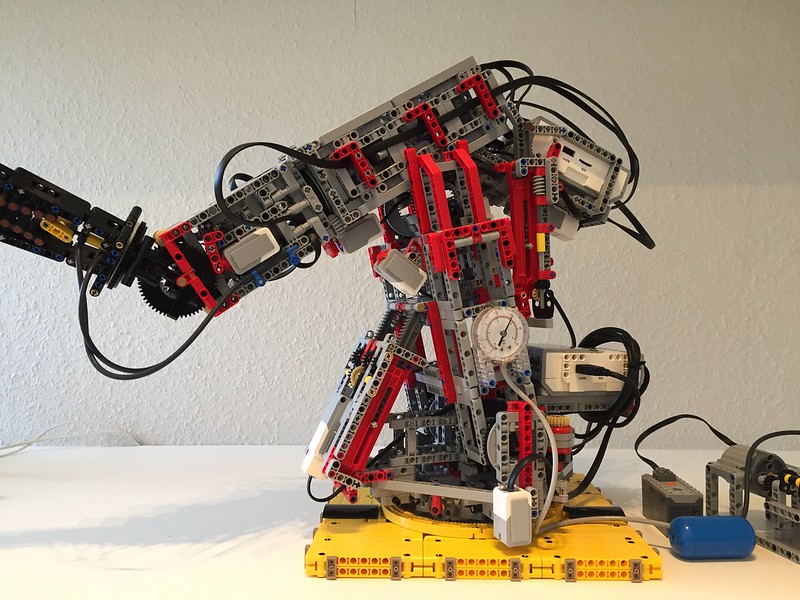 END_OF_DOCUMENT_TOKEN_TO_BE_REPLACED

As you can read in the first article about the Ticket Dispenser Unit (click here for the article), the version for Lego World 2016 a ‘fast build’. Nevertheless, it worked almost flawless. Almost … sometimes the card was not transported to the end. With just some small modifications, it works even better now. 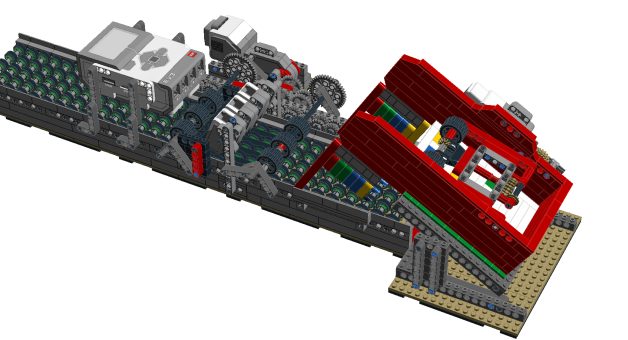 END_OF_DOCUMENT_TOKEN_TO_BE_REPLACED

About Sioux .NET on Track

Sioux .NET on Track is one of the expertisegroups of Sioux Embedded Systems in Eindhoven.

We are a group of enthusiastic colleagues who come together after working hours to get experience with Microsoft.NET. To make learning fun, we develop an application in C# for making a full automated Lego train layout, using Lego Mindstorms and Lego Power functions.